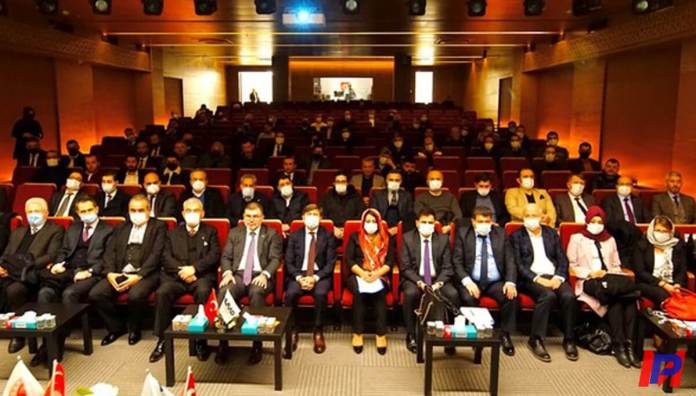 “The year 2022 will be a year of very big investment, and the year of strengthening resolve,” said Mahmoud Asmli, head of the Association of Independent Industrialists and Businessmen in Turkey (MOSSAD), stressing that Turkey will be a “global center for trade in 2023.”

This came in the first consultative meeting organized by the association, in cooperation with the Arab and Turkish Media Association, with journalists and media outlets, at its headquarters in Istanbul on Wednesday.

Asmli announced that 2022 is “the year of investment, in line with Turkey’s goals for 2023, Al-Musyad will provide added value to the Turkish economy throughout the year, to accelerate the employment process. We will sign important projects that will increase the volume of production and investment.”

He added that through these relations, it is possible to develop production spaces, prepare detailed reports for companies, and prepare regionally for investment by meeting businessmen, especially in the Gulf countries.

He said that the “Al-Musyad” association, which has 164 liaison offices inside and outside Turkey, is working to achieve Turkey’s goals for 2023, and to strengthen the relations of the Islamic Union, which has the regions of the Middle East and Africa.

And he added, “We are trying to open roads and establish the right relations at the right time. We are at an important historical turning point, so the efforts this year will be twice as much as last year. Turkey will be a global center for trade in 2023.”

Recalling that they had put forward a strategic plan of 7 items last September, Asmali said: “The projects of the Al-Mussad Commercial Office and the Arab Businessmen Liaison Office have been implemented within the scope of these goals, and these commercial offices will contribute significantly to regional development.”

And he added, “We aim to create new partnerships in export-oriented trade by providing reports on enhancing investment areas and developing production areas. With these units, we aim to create a business environment that supports regional development by bringing together investors from the Gulf region and our businessmen.”

Asmli stated that “the total investments of businessmen in Al-Musyad in 2021 amounted to 25 billion Turkish liras, and this means that we can take strong steps for the future.”

He spoke about the association’s many activities, including the trend to digital transformation, and announced the start of the “Musyad village” project in northern Syria to build 663 homes.

He expressed Al-Musyad’s confidence in the youth’s capabilities. Among the 12,000 businessmen in the association, there are “4,000 young people who shape the future.”

He added that work is continuing to hold the Turkish and Arab Business Summit in the city of Gaziantep between May 27 and 27, and Musiad E X P O 2022 at the T U Y A P Center in Istanbul between November 2 and 5.

On the military tensions on the Russian-Ukrainian borders on the Turkish economy, Asmli said that “the war will not break out between the two countries, but the tension in relations will certainly affect global energy prices as a whole.”

He explained that the increase in energy prices during the last forty years “affected all countries, even developed countries, not only Turkey.”

Kristina Mandarina no longer looks like the girl from the booth

Sarajka Alisa Niksic is an internet star in Canada

Jennifer Aniston saved the “Emmy” awards, put out the fire in the studio

People still want to see my breasts, even though I’m 62 years old

How to spend a vacation in quarantine 2020

Perry posted a photo of herself four days after the birth

She sang, designed clothes and acted, and is now a billionaire